Why We Should Keep the Electoral College ... Or At Least Not Throw it Out.

To many, the Electoral College could best be described as the appendix of American democracy - a vestigial organ sitting in the nation's body politic that's only noticed for the problems it causes.

Given the Electoral College has overruled the popular vote in two out of the last five presidential elections, it is as justifiable that some would be calling for an end to it as it is predictable that a person's opinion on the subject is directly related to how they voted.

Like many of the things the Founding Fathers left us, the Electoral College came partly out of fear of creating another monarchy in the form of an overly powerful executive branch, partly out of fear of what kind of leader the American people would elect when given the choice, and partly out of the need to balance the vision of an egalitarian, representative democracy that granted unprecedented freedoms to ordinary people while still enslaving some of them.

I am not going to make the argument that the Electoral College is some work of forward-thinking genius on the part of the men who created it. For transparency's sake, I should also state that the first Democrat I voted for in a presidential election was Hillary Clinton, and that was more a vote against Trump.

Disclaimers out of the way, out of all the electoral reforms we should consider in the wake of the last four years, getting rid of the Electoral College isn't one that would have the greatest impact, carrying negative consequences that could outweigh any positives.

One of the arguments those who favor the Electoral College make is that running for president is more like running 50 different elections as opposed to one large, national one. Living in Massachusetts, where almost half of the population wasn't born the last time a Republican won the state, I can attest to the fact that our presidential election cycle was about as lively under King George as it is now.

Massachusetts' case is the norm. In any presidential election, there are usually only about 10 swing states that are truly up for grabs. As a result, these states receive the bulk of attention from the candidates, while the rest of America receives the consolation prize of being spared hours of attack ads and robocalls.

This strategy only works if candidates ignore the correct states, something Clinton's campaign failed to do in 2016 when the states comprising "the Blue Wall" broke for Trump. These were states whose large manufacturing sector meant a large number of union households that typically voted Democrat.

These were also the states hardest hit by decades of globalization. Where the country as a whole benefitted economically from trade agreements such as NAFTA (an agreement Clinton's husband signed), industrial states continued to decline economically, with many manufacturing jobs moving overseas. As to how much international trade agreements led to the decline of manufacturing in the Midwest is up for debate, however two things are clear:

Federal policies may not be guilty of undermining the quality of life in industrial towns across the Midwest, but they were clearly guilty of leaving these people behind. In a national popular vote scenario, industrial towns in the Midwest could have safely been ignored by presidential candidates and continued into decline.

The states that most often determine presidential elections are the ones most heavily impacted by changes in our economy and society as a whole. In this sense, the Electoral College ensures that those most affected by changes in policy have extra weight in shaping it. 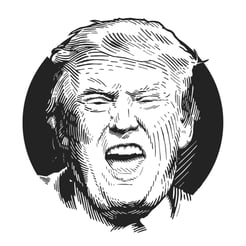 In 2016, Trump became the first president in American history to contest the results of an election he won, claiming that his margin of negative 2 million in the popular vote was the result of people voting illegally.

He even went so far as to form a commission to investigate whether voter fraud led to him not losing by fewer votes than he did.

Four years later, Trump continues to undermine Americans' faith in the popular vote, teams of lawyers from both parties are assembled in swing states, and many brace themselves for a contested election. People are expecting a mess, but it's likely to be a contained mess.

To add some perspective, one in every four presidents elected since World War 2 has won the popular vote by a margin of less than 1%

While Trump appears unlikely to see the same margins this year, it's not difficult to imagine a candidate calling for a national recount across tens of thousands of precincts after a slim loss in the popular vote.

It’s also much easier to imagine Trump calling for a recount across the country regardless of the margins in November.

Whereas the current system focuses our attention on one or a handful of contested states, a national recount would be too broad of a target to effectively scrutinize, and too easy of a target to question and manipulate.

In the case of 2016, only 28% of those registered to vote cast ballots for the winning candidate.

An argument could be made that the Electoral College makes people less likely to vote, as those living in the 80% of states that aren't competitive have less of an impact on who becomes president than those in swing states, however data from the US Elections Project shows that swing states don't necessarily outperform noncompetitive states in terms of voter turnout.

While a number of factors can effect voter turnout, our process for determining who people get to vote for doesn't help. Since 2000, approximately 10% of voters took part in the presidential primary process each election cycle. To phrase this another way, the choice Americans had in each presidential election since 2000 was determined by a small minority of voters who, arguably, had to choose from candidates vetted by an even smaller minority of voters.

Whether we have an Electoral College or not, there's little reason to believe our current system will produce candidates compelling enough to inspire the 40-50% of voters who choose to stay home on Election Day.

Americans WAnt More Choice, Not a Different WAy to Make the Same OneS

Americans continuously voice support for more choice in the political process, with a recent Gallup Poll showing 38% of Americans feel the two party system adequately represents them, and another 60% saying a third major party is needed.

For those who didn't vote for the current president, let's keep in mind his candidacy was driven by people who felt ignored by the system. Over the last 30 years, wage growth has slowed for the majority of Americans, income mobility has decreased, and the costs of healthcare and education have become less affordable.

These trends have persisted through Democratic and Republican administrations.

New Zealand encountered a similar political crisis in the 1970s and 80s, where the right leaning National Party continued to win a majority of seats in parliament, despite receiving fewer votes than the left-center Labour Party. Their response was to implement a system of mixed-member proportional representation, which resulted in the emergence of minor parties that better represented the diversity of the country's electorate and better represented the popular vote.

A Thousand Hacking at the Branches of Evil...

While we commonly cite the Electoral College for working against the popular vote, less discussed is the fact our system of congressional apportionment often ignores large swaths of voters. In the 2018 midterms, for instance, roughly the same number of Ohio residents cast ballots for Democrats as Republicans, yet Democrats only won 20% of the state's seats.

Conversely, roughly one-third of Maryland residents voted Republican, yet the party only won 1 out of the state's 9 representatives.

The House of Representatives is the one body explicitly designed to represent the popular vote, yet our winner-take-all system of elections combined with tactics such as gerrymandering allow both parties to immunize themselves from public opinion, making for a government that's not responsive to the will and needs of the people it serves.

Following New Zealand and implementing a system of proportional representation at the House level would accomplish the following:

Most importantly, it can be implemented at the state level, as opposed to needing the level of federal buy in abolishing the Electoral College would require.

The United States has a population roughly 100X that of New Zealand and is 37X as large geographically. The idea such a vast, diverse nation could be adequately represented in the platforms of two parties has been proven false in the form of low voter turnout and declining public trust in our institutions.

Thoreau wrote, "There are a thousand hacking at the branches of evil to one who is striking at the root."

By focusing solely on the Electoral College, we're starting at the top of the tree.