How the Hell Did We Get Here?: Political Polarization Over Time 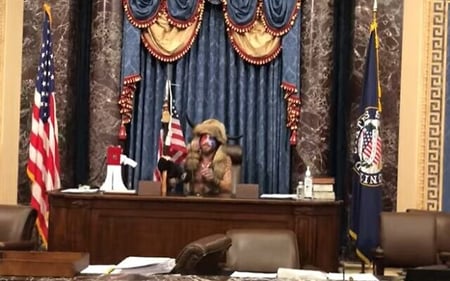 It should be a forgone conclusion that political polarization in America has reached an unhealthy level when the end of a presidential election cycle is marked by an angry mob storming the Capitol, the seat of the Senate President being occupied by a shirtless man in a buffalo headdress carrying a spear, and an outgoing president being impeached a second time.

Prior to all of this happening, the only thing America’s two major parties seemed to have in common was the belief that their presidential candidate won the election.

While the former office-holder and self-proclaimed winner of the 2020 election certainly bears responsibility for recent events, he didn’t create the polarity that fueled it, nor will his exit end it.

The concept of political polarization became of interest to pollsters and academics in the early 2000s, after then-President, Bill Clinton and a Republican congress ushered in a new era of political trench warfare that continued with the contentious electoral victory of George W. Bush in the 2000 Presidential Election.

All studies indicate this phenomenon has worsened in the past two decades. In 2014 Pew Research found that, while Americans became more accepting of interracial and same-sex marriage, they’ve become less accepting of a family member marrying someone from a different political party. In the same study, 27% of Democrats and 26% of Republicans viewed the opposite party as a threat to the nation's well-being.

The trend has only worsened in the years since that study, culminating in the closest thing we’ve seen to civil war since - well - the Civil War.

While many are now asking for a return to the normal tone of political discourse, given we closed out a decade that began with Birtherism and ended with QAnon, a fair question to ask is what, exactly, does “normal” look like?

It all starts with the Civil War

Given that, prior to the internet, we lacked platforms to provide us with a written record of everyone's interminably long political arguments, measuring how much the two parties liked each other over time isn't an easy task. This being said, if we measure political polarity by the level of compromise between two parties - that is, the likelihood members of Congress could cooperate with members of the opposite party without being punished by their own constituents - a clearer picture emerges.

In a study done by VoteView, roll call votes in the House and the Senate were used as a way to determine how often members took positions that aligned with the opposite party. The chart below shows the level of overlap - that is, Democrats casting votes in favor of conservative policies and Republicans carrying votes in favor of more liberal ones: 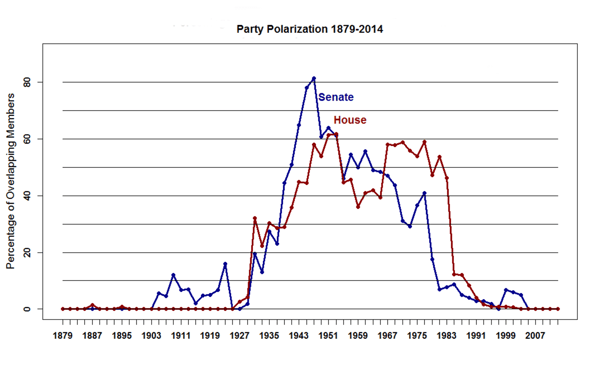 You may have noticed that, at the beginning of the chart, cooperation between Republicans and Democrats was nonexistent. Given both parties were founded to represent opposing sides of the Civil War and their prior strategy for resolving political disagreements was shooting at each other, disagreeing on how to vote was a marked improvement.

This tone softened in the first half of the 20th century, as Democrats courted working class voters in the North - a bloc that included African Americans - and became a coalition of those most and least likely to support the Civil Rights Movement. Ideological contradictions in the Democratic Party notwithstanding, in the roughly 30 years following World War 2, Congress produced landmark legislation, such as the Clean Air Act, the Voting Rights Act, Medicare, and the lesser known National Defense Education Act - which subsidized STEM education and led to innovations such as the internet, which we all now use to yell at each other.

and ends with ... the Civil War 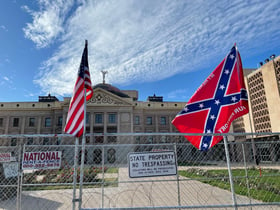 Following the Democratic Party's clear embrace of the Civil Right Movement with the signing of civil rights legislation in the 1960s, Southern Democrats began moving away from the Democratic Party, originally drawn by Richard Nixon's "Law and Order" message - appealing to their anxieties about racial unrest - and later solidified by Ronald Reagan's embrace of the Evangelical community.

It's no coincidence that, right around this time, cooperation between both parties in the above chart falls off a cliff, as both major parties became more philosophically homogenous.

This being said, this realignment doesn't fully explain the current level of conflict between the two major parties. While they may have their disagreements on wedge issues such as guns and abortion, they also fail to reach a consensus on issues popular with large blocs of voters in both parties - such as investing in infrastructure or, more recently, providing stimulus to Americans during the pandemic.

In this sense, the appropriate question isn't why members of the two major parties don't get along, but what is it about America's political system that disincentivizes compromise on popular legislation?

The Wrong kind of American Exceptionalism

A number of factors, such as the advent of partisan media outlets as cable news became more prevalent in the 1990s and - later - with the internet and social media, have been blamed. None of these, however, are unique to America.

As it stands, the United States is the only country to have partisan mistrust reach such a level that a major body of government was overrun by people convinced an election was stolen.

What's more, as polarization between the two major parties has increased, the number of voters who affiliate with either has decreased. In another survey by Pew Research, the number of people identifying as independent rose steadily during the latter half of the 20th century and became a majority voting bloc in 2009.

This doesn't indicate that Americans, on the whole, have become more divided, but that the country is increasingly represented by two vocal, hyperpartisan minorities, with the wishes of a large segment of the electorate left unheard.

This is rooted in two factors:

The result is a system tilted towards the two major parties, where a candidate typically only has to rely on turning out their base plus ensuring either enough independents vote for them or - at the very least - stay home on Election Day.

This rewards candidates who refuse compromise, creates mistrust between America's two parties, and makes a government more responsive to their party apparatus than to the will of the people.

How to FIx It

Removing the winner-take-all system of determining outcomes in elections is a good first step. Reforms such as ranked choice voting have shown to create elections where candidates are forced to run for something as opposed to against someone, and also truly gauge the opinions of everyone they represent when determining their platforms.

Proportional representation - where the percentage of seats in government a party receives is equal to its percentage of the popular vote - is ideal, however more difficult to implement in the US given our district-based system and federal laws against multi-member districts.

Both reforms would open the door to a greater diversity of voices and produce candidates responsible for proving what they did while in office, as opposed to what they kept someone else from doing.

It also indicates that Americans aren't politically divided, insomuch as they're presented with increasingly divisive choices. Given recent polls by Gallup show 50% of Americans identify as independents and 62% of Americans think a third major party is needed, the only real polarity in politics seems to be among those in government.