Who Benefits From Political Polarization? (HINT: NOT US)

In 1950, a report published in the American Political Science review issued a dire warning over the state of politics in America. The nation’s two parties, it argued, were too much alike and got along so well that voters might be inclined to gravitate towards smaller parties with more extreme platforms.

70 years later, the parties appear to have resolved the issue of getting along too well, and their followers appear to have chosen extremism anyway. During the decades of partisan “sameness”, the federal government manager to pass civil rights legislation, build a national highway system, and put human beings on the moon.

The subsequent decades of partisan distinctness have resulted in a Congress that hasn’t officially passed a budget since 1996 and the first attack on the Capitol since the War of 1812.

Despite the levels of animosity between America’s two major parties, every president since Obama has made overtures calling for unity in the beginning of their administrations, indicating there’s some appetite among voters for elected officials to get along, even if their definition of compromise os the other side changing their opinion.

Polling backs this idea up. In a report released by Georgetown University’s Institute of Politics and Public Service in 2019, over 80% of respondents felt compromise and common ground should be the goal for political leaders, and also expressed frustration at the breakdown in civility among elected officials.

With the clear negatives of hyper-partisanship in terms of public opinion, effective government, and - now - the safety of those who work in it,  it begs the question, who - exactly - benefits from the level of political polarization we see today?

The short answer: Not us. For the longer answer, read on. 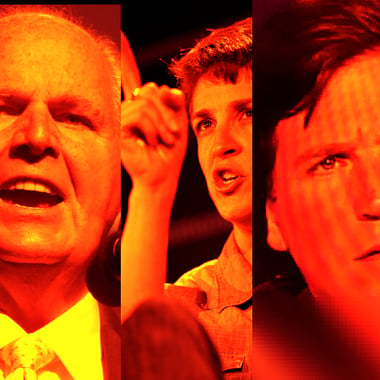 Roger Ailes, credited as one of the founding fathers of conservative media, first came up with the idea of a conservative news channel in the 1970s as a way to circumvent what many conservatives viewed as the liberal biases of network news. As cable television made room for niche programming to be profitable, Ailes was able to realize his vision in the mid-nineties with the founding of Fox News, and saw viewership dwarf that of other news networks in the decade that followed.

Where Ailes’ mission with Fox News was an ideological one that was accidentally profitable, MSNBC made a clear pivot towards more liberal viewers when Keith Olbermann’s nightly rants against the Bush Administration proved great for ratings.

While no strong evidence exists that would indicate exposure to conservative or liberal leaning programming can make someone partisan, there are studies that show it can make already partisan people even worse. This is part of a larger phenomenon known as “group polarization”, where interacting with like-minded people results in the development of more extreme views.

Regardless of how much of the blame partisan media outlets deserve for today’s polarized environment, it’s clearly good for business.

In addition to guaranteeing viewers for cable news, hyper-polarization is also a great way to guarantee votes and campaign contributions for those serving in Congress. A study put out by the Cook Political Report in 2017 revealed that the number of competitive seats in the House of Representatives declined from 164 in 1997 to just 72 in 2017.

To put these numbers into perspective, this means approximately 83% of House members have to be more concerned with being voted out by members of their own party in the primary than they do the opinions of the median voter in their district.

Some of this is due to gerrymandering and some due to a geographic sorting of Americans into more politically homogeneous clusters, but the outcome has been elected officials who aren’t held to account for what they accomplished in Congress, but what they prevented the other party from accomplishing.

In addition to guaranteeing votes, more polarizing candidates seem to have an edge when it comes to fundraising. Alexandria Ocasio-Cortez, for instance, came in number 5 in total fundraising from 2019-2020, outranking many more senior members of Congress. Josh Hawley, the Senator from Missouri who famously gave people protesting at the Capitol a raised fist before they went on to storm the building, raised almost $1 million in the weeks that followed the attack.

With the presence of a partisan media apparatus to parrot their party’s talking points, feeding into the current elevated level of polarization allows those from relatively safe districts to have an outsized influence in fundraising by taking on more extreme positions, as well as providing a convenient boogeyman for the other party to point to in their own fundraising.

Getting back to the number of safe seats in the House - outside groups know with roughly 85% certainty who’s going to be sitting in Congress after the next election, making it easier to determine where their money will be best spent. As a result, incumbents generally receive 5X the number of campaign contributions than challengers.

To that end, donors appear to be getting their money’s worth. A study put out by Princeton University in 2014 showed public opinion had a near zero effect on whether or not legislation was passed, whereas the interests of campaign donors were directly related.

The fact polarization creates a situation where an elected official is judged by how hard they push against members of the opposing party as opposed to what they accomplish provides convenient cover for legislation that serves the interests of those who fund elections, rather than those who vote in them.

The Darkest Spot is Also the Brightest

If there’s a bright spot in all this, it’s that - after the attack on the Capitol - there seems to be some reflection on what got us to this point. In the days that followed, corporate donors pulled back from members of Congress who challenged the results of the Electoral College, and there was a rare break in unity on the Republican side as party members chose to either condemn or impeach Donald Trump.

To a lesser extent, similar fissures could be seen on the Democratic side following the election, as members from more moderate swing districts bemoaned the drag far left members of the party had on their campaigns.

Both indicate a recognition of the more moderate voices that have gone unheard as the political trend in America has been to favor heat over light.

Getting back to the report cited at the beginning of this post - while the focus was on the fact both parties were too much alike, the real problem was a lack of choice. In the 1950s, Americans had two major parties virtually indistinguishable from each other, meaning a voter could choose a candidate with the flip of a coin and expect the same result.

In 2020, both parties have very strong, distinct national brands, yet one could argue voters have little choice when it comes to what legislation gets passed. With the high percentage of safe congressional seats and an active partisan media apparatus that effectively serves as a propaganda arm to their partisan base, the benefits of remaining polarized still outweigh those of compromise.

Campaign finance reform and regulating what media outlets broadcast has proven difficult to enforce on first amendment grounds, yet addressing the issues that make safe seats safe is far easier. Ending closed primaries, where only the most partisan choose the candidate, and implementing reforms such as ranked choice voting and proportional representation would tilt the balance of power back in the hands of the voters, leaving the media and donor class to follow suit.

If the threat to America’s two major parties in the 1950s was their voters choosing extremism, the threat today is that an ever growing bloc of independent voters chooses moderation. Given recent polling data supporting the establishment of a third major party and talk of the Republicans splitting in two, it seems these votes are there for whoever wants to take them.