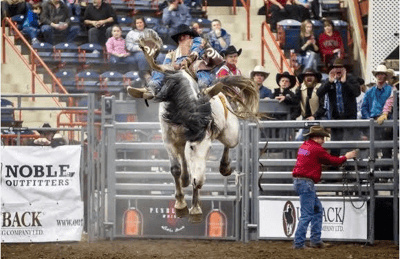 At an age when I was asking my mom for guitar lessons, Wacey Alpha Cody - Libertarian candidate for Texas's 11th congressional district - was asking his mom if he could enter the rodeo. Cody paid his way through college riding bucking horses, earning his masters in counseling psychology before returning to his hometown of San Angelo, Texas to pursue his family's tradition of raising cattle.

While some might find his turn to politics odd, it's fair to say a solid foundation in psychology and over a decade of getting thrown from horses might have been the best way to prepare for a notoriously tough and sometimes crazy business.

I had a chance to speak with Cody in the most recent episode of You Don't Have to Yell, which you can listen to below, on Apple Podcasts, Spotify, or wherever else you might get your podcasts.

Texas's 11th congressional district is twice the size of Massachusetts in area - stretching from the outskirts of the Dallas/Fort Worth area to the state's western border with New Mexico - and has rattlesnakes. It's a region consisting mainly of oilmen and ranchers, all who've inherited a fierce spirit of independence and self-reliance from the area's original settlers - subsistence farmers who defined a good day as one where they didn't die of dysentery.

While it's fair to ask what would prompt Cody to run as a Libertarian in a staunchly Republican district, a better question would be why a Libertarian hasn't represented Texas's 11th district before, given the party's preference for putting power in the hands of local government, as opposed to encouraging federal overreach.

In a way, both questions can be answered in the same breath. Originally choosing to seek the Republican nomination for the district, Cody found a culture that encouraged candidates to represent the party platform, rather than the will of their constituents. Faced with the choice of either lying to people or taking on the challenges of a candidacy unaffiliated with either major party, Cody chose the latter.

Looking at Cody's platform, it's easy to see how he failed to fit the major party mold, with views as unique as the district he seeks to serve. His stance on criminal justice reform, informed by his background in psychology, focuses on community involvement and using federal money to fund proven ways to modify behavior and reform an individual, as opposed to just dumping money into a system that simply warehouses people and turns them into better criminals.

While this may seem odd in a state notorious for being tough on crime, it clearly reflects an aversion for government waste that's both clearly Libertarian and Texan.

At its core, Cody's position is that the people of West Texas should be telling Washington what they need, rather than their representative acting as a salesman for the party line.

There's no doubt that the chances for anyone running as anything other than a Republican in Texas 11th are slim, but a man who spent over 10 years riding horses that really didn't care to be ridden is already familiar with long odds.

The only difference between this rodeo and his last one might simply be the number of clowns.