Every decade, the North Carolina General Assembly engages in the process of redrawing the boundaries of the state’s congressional districts, as required by law. Going above and beyond the minimum requirements, the majority party has historically engaged in the almost punitive practice of carving the minority party out of existence.

This has resulted in oddly shaped districts with nicknames like “The Snake” and Republicans filing suit against the congressional map they drew claiming that it violated the Voting Rights Act.

Mitch Kokai, Senior Political Analyst for the John Locke Foundation, is part of the organization’s efforts to make North Carolina’s redistricting efforts slightly less colorful by implementing processes that take the redistricting process out of the hands of legislators and back to the voters.

(You can listen to my full interview with Mitch below, on Apple Podcasts, Spotify, or wherever else your bad self gets your podcasts) 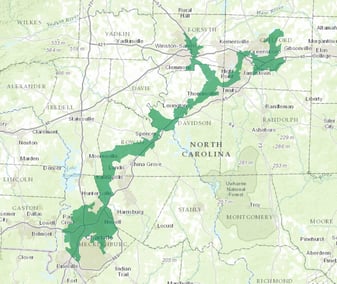 Since the last redistricting exercise in 2011, North Carolina’s congressional map has favored Republicans. Despite the fact both parties have received, on average, around 50% of the popular vote in congressional elections, Republicans have walked away with around 73% of the state’s congressional delegation.

The average would be above the 75% mark, if not for the fact the 2018 victory of Republican Mark Harris was nullified due to charges of voter fraud (a Republican won in the special election that followed) and the 2012 election, where the Democrats winning the majority of the popular vote meant the Republicans had to settle for a meager 70% of the state’s delegation.

While the Republicans may seem like the bad guys in the above scenario, Kokai is quick to note that Democrats, having engaged in the same practice for the years they held control over the General Assembly, had an opportunity to change the rules prior to losing power in 2010 election and only opted to keep said rules out of the belief they’d still be in charge.

The format for redistricting the John Locke Foundation endorses is similar to the process California uses to draw its districts (see YDHTY, episode 42 for additional context). This includes keeping districts compact, contiguous, keeping counties together whenever possible, and removing outside data - such as the results of past elections - from the process.

In short, districts where the voters can select their legislators, as opposed to the other way around.

This is somewhat complicated by the Voting Rights Act, which requires North Carolina to adhere to standards that prevent gerrymandering along racial lines. While this law is designed to prevent the dilution of political power amongst African-Americans, it has the odd effect of tilting the map in the favor of Republicans - a party that traditionally receives single digit support amongst this demographic.

With African Americans comprising 40% of the state’s Democratic Party, carving majority minority districts creates a scenario where Democrats win by wider margins in fewer districts, while Republicans win by slimmer margins in more.

Kokai also notes that districts that make sense geographically still end up favoring Republicans, as Republican voters tend to be spread more evenly throughout the population, whereas Democrats are typically cloistered in dense, urban regions.

THE PROBLEM WITH REDISTRICTING…

While the John Locke Foundation endorses improving the redistricting process in its current form, It should come as no surprise that YDHTY’s position is the problem with districts are districts themselves. Even in the fairest redistricting scenario, our first-past-the-post system means voters really have only two parties to choose from, who impose broad, national platforms not always related to the local concerns of those elected to the House should be representing.

A proportional system, like that of Germany, would allow for congressional delegations to be more fairly apportioned according to the popular vote, remove the built in advantage for the two major parties, and require both to govern from the center, as opposed to appealing to their partisan base.

If the above change sounds scary, you can take comfort in the fact it will probably still leave plenty to complain about.