Boats, Helicopters, and Geeks with Clipboards | How Elections run in America | YDHTY, EPisode 40

Genya Coulter, Social Media Program Manager for the US Vote Foundation (twitter @ElectionBabe), describes a good election as "one where you don't end up on the 6 o'clock news." This is probably the reason why many of us live under the assumption that elections in the United States either consist of deliberately understaffed polling places where long lines suppress the vote of young people and minorities, or throngs of undocumented immigrants showing up by the busload to vote as dead people.

In short - the administrative part of running an election should be boring, and the conspiracy theories that pop up on social media in the days that follow - even if true - are exceptions to the rule.

Coulter and I discussed this, the real problems facing America's electoral system, and what can be done about them on the latest episode of You Don't Have to Yell, which you can access via the recording below, on Spotify, Apple Podcasts, YouTube, or wherever else it tickles your fancy to listen. 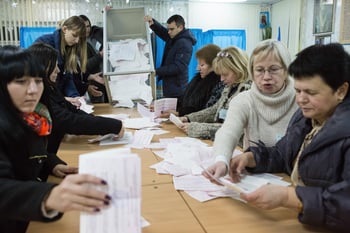 In addition to her work with the US Vote Foundation, Coulter also serves as Precinct Clerk for Polk County, Florida - a role that oversees the management of staff, materials, and equipment on Election Day. While elections in the US are run at the local level - with approximately 10,000 municipalities all doing things a little bit differently - at their heart are people like Coulter, self-described "geeks with clipboards" just looking for a good, clean fight.

One of the more comforting things about our conversation was the fact that, with such a dispersed and varied system of running elections, it's actually easier to run for office than it is to figure out a way to rig the system in your favor.

People like Coulter often rely on less conventional methods to ensure votes are counted quickly - such as transporting boats by ballot in Longboat Key, Florida, or by helicopter in LA County, but are often no more exciting than the high school gymnasium where you cast your ballot.

What skews Americans' perceptions about elections and feeds conspiracy theories is the combination of a locally funded and run system of elections staffed largely by volunteers and a 24 hour media complex where people from all over the country demand up to the second results on elections that often don't have any effect on them (example: approximately 19 million people tuned in to watch Super Tuesday, as opposed to the approximately 14 million people who actually cast ballots).

Vote counting is only as perfect as the person casting the ballot, and can often be derailed by any number of voter errors - such as someone inadvertently disabling a vote counting machine by choosing to fill out their ballot with a glitter pen (true story). In elections that are increasingly decided by razor thin margins, a large group of people unaffected by the outcome of an election demanding to know the outcome the second the polls close does a disservice to those seeking a fair and accurate count.

Elections are also largely funded by state and local governments with limited resources, so the choice of opening, closing, and staffing polling places often comes down to data from past elections and budget. As a result, unexpected spikes in voter turnout create long waits to cast votes, casting doubt on the fairness of the process.

In terms of what can be done to improve elections, Coulter recommends - first and foremost - voter education. Elections run best when people know where to go, what time, and what to do when they get there.

Second, making it easier to cast absentee ballots and vote by mail would reduce pressure on polling places on Election Day, as well as giving more people the opportunity to vote. The current system in many states disfavors hourly workers or those with long commutes, who don't have the freedom to step out to their local polling place during working hours.

This last measure - Coulter says - actually favors Republicans in most instances, but it seems the party has yet to get the memo.

As a final point, the conspiracy theories cited at the top of this article, as well as the ones I carried prior to talking with Coulter, are quickly dispelled after speaking with people who are actually involved in the process of running local elections. Perhaps if more of us volunteered to take part in the process, we'd help with the issues of budget, crowding, and a cynical interpretation of the system as a result.

As with everything, all of the above is easier said than done, and will take time to implement. With states and municipalities cash strapped by the current pandemic and the enthusiasm of a presidential election, November 3, 2020 may be another unfortunately exciting news day.