As with our puzzling aversion to the metric system and our lack of enthusiasm for soccer, America’s two party system makes it an outlier in the world. While most democracies have large center-left and center-right parties that garner most of the votes and seats in government, they also have viable minority parties which traditionally win enough seats in parliament to have a voice in policy creation.

Bernard Tamas, Associate Professor of Political Science at Valdosta State University, has dedicated the bulk of his career studying this phenomenon in the US and its impact on elections over the last century. His book, the Demise and Rebirth of American Third Parties, makes the case that - despite America’s long time resistance to third parties - historical data on American elections and recent electoral results in other democracies show they may be due for a comeback.

In the most recent episode of YDHTY, we discussed the two party phenomenon in the United States, its impact to date, and his current research on electoral bias, which is being funded by grants from the MIT Election Data and Science Lab as well as the American Political Science Association's Centennial Center.

You can listen to the full episode below, on Apple Podcasts, Spotify, or wherever else your bad self gets your podcasts.

Third Parties - From Influencers to Spoilers 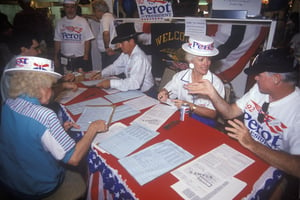 Not since the founding of the Republican Party in 1864 has a new political party had a meaningful impact on national elections (and - to be fair - the Republican Party was more like Northern Whigs breaking off to form their own anti-slavery solo act, as opposed to a totally new band being formed).

While third parties have gained some traction in election cycles - such as Teddy Roosevelt's Progressive/"Bull Moose" Party in the early 1900s, or Ross Perot's Reform Party in the 1990's - they've served more as warning shots to the two party system than fatal ones - calling attention to issues important to voters that had been left out of the major party platforms.

What's notable over the 20th century is how third parties went from having a meaningful impact on the direction of one of America's two major parties in the beginning to being cast as spoilers in the end. While the Progressive Party never had an impact at the federal level, candidate Teddy Roosevelt received more votes than his Republican opponent, and they managed to seat 9 members of congress during its short lifetime.

In contrast, Ross Perot, the Reform Party's 1992 presidential nominee, was mainly blamed for spoiling the race against then-President George H.W. Bush. The one candidate the party did manage to put in office was Jesse Ventura, who's popularity as a professional wrestler and actor did more to boost his candidacy than did the Reform Party's platform.

America's "winner take all" electoral system, where a candidate only needs one more vote to win office, also deserves some of the blame, as a vote for anyone who doesn't at least stand a chance of coming in second is throwing your vote away - a phenomenon described as Duverger's Law.

While these all play a role in solidifying America’s two major parties, they don’t explain the absence of any meaningful third party in politics, outside their role as spoilers. After all, other winner-take-all systems, such as Canada, the UK, and India have similar opportunities to rig the electoral map in their favor, and still have multi-party systems where minority parties hold office.

Tamas’ research backs this up, showing that all of the above factors do have an effect, but none great enough to explain the situation in the United States.

The one difference Tamas cites between the United States and other winner-take-all electoral systems is the lack of strong, nationalized media that gives minority parties an equal voice with the two major parties. As media in the United States is almost entirely privatized, equal access laws are more loosely enforced, meaning airtime is given to incumbents, those who pose a meaningful challenge to them, or those who can have the money to buy ad space.

All of the above work to the advantage of the Republicans and Democrats, who use access to people in power in exchange for having their talking points dominate the 24 hour news cycle. The result is typically two people shouting over each other about the most divisive issue du jour, while kitchen table issues, such as healthcare and the economy, are crowded out.

In the case of the Reform Party, it took a billionaire self-funding his candidacy to produce a viable presidential candidate, and - after winning almost 20% of the popular vote - the Democrat and Republican run Commission on Presidential Debates simply rewrote the qualification criteria so he couldn't participate in televised debates in 1996.

With campaign donors looking to get a return on their investment and the two major parties controlling the political conversation in the media, it makes it virtually impossible for minority parties to compete against the better funded major parties, and also means the media is often the place where the parties sell their donor's agendas, as opposed to our own.

Don't Kill Your Television ... YET 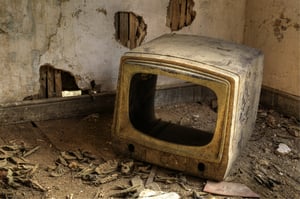 While all of the above support arguments for stronger laws around equal access to the media and campaign finance reform, both are near impossible tasks.

Assuming either could make passage through Congress, prior campaign finance laws have been gutted in the courts due to our constitutional right to free speech, and infractions against media outlets over equal access require someone with the money to file a suit against them - both of which require expensive lawyers outside the price-range of your typical independent candidate.

The simplest fix and the one most popular with voters is to change the winner-take-all nature of America’s elections to one that leaves room for a wide range of voices - such as implementing ranked-choice voting and proportional representation on a state by state level.

While the major parties would always hold an advantage in terms of fundraising, these measures would present them with enough of a threat from dissatisfied voters that they’d at least have to govern towards the center, rather than today’s divide and conquer strategy.

A Warning from Hungary

Tamas’ work also provides a warning from Hungary, a country with a similar electoral structure as the United States. Since coming to power in 2010, the right-wing Fidesz party has managed to erode freedom of the press and cement almost perpetual one-party rule in the state through a mix of gerrymandering and the packing the courts and civil service with loyalist.

Their rise to power came after a huge shift in public sentiment over the 2008 financial crisis removed the ruling socialist MSZP party from power, and gave Fidesz a slim majority, at 52% of seats in parliament. With the left split amongst a number of different parties in Hungary, Fidesz has managed to cement a supermajority via gerrymandering and restructure the state's constitution, despite never gaining more than the 52% of the popular vote it saw in 2010.

With a Democratic Party split between moderates and progressives in the United States, a sitting president already warm to the idea of putting more restrictions on the freedom of the press, and a population conditioned by a hyper-partisan media landscape, it's not hard to imagine a similar situation occurring here.