The Two Santa Claus Theory: How America Marketed, then Unmarketed the Income Tax

In an effort to marshall support around the expansion of the federal income tax in 1942, the US government enlisted the help of Donald Duck. The US had just entered into World War 2 and was oddly bound to the primitive notion that the government should have some way to pay for this vast increase in spending, as opposed to the modern economic theory of writing a check for $2 trillion and winging it.

In the film The Spirit of ‘43, Donald Duck stars in a story explaining why paying taxes is important to defeating the Axis Powers as well as what, exactly, he does for a living. (FYI - He puts “actor” in the occupation section of his tax form, which gives us no explanation as to why he always wears a sailor hat or why he never wears pants.)

While it’s unclear how much of an effect the government’s new pantsless mascot had on public opinion, the number of Americans required to pay income tax grew from approximately 15% of the population to 85% (source: https://taxfoundation.org/tax-equity-and-growth-nonpayers/), and the population didn’t appear to rise up in protest.

Then along came two Santa Clauses... 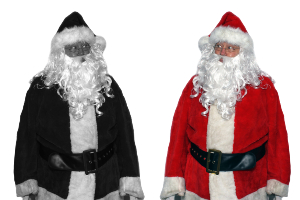 A little over 30 years later, conservative journalist Jude Wanniski would enlist the help of an equally beloved character to market a much different strategy. In 1976, believing that the government had grown too big and realizing Republicans couldn’t win elections on the platform of cutting spending, he published “The Two Santa Claus Theory”, putting forth the idea that if the Democrats could be the Santa Claus of public spending, the Republican Party could be the Santa Claus of tax cuts.

The theory was that tax cuts would be both appealing to voters and put pressure on the federal government to curb spending. It turned out only half of that equation was true, but at least this time the mascot wore pants.

While the idea of cutting taxes was as popular as beating Hitler 30 years prior, the Two Santa Claus Theory fundamentally changed the nature of how we view taxes and, as importantly, who we view as contributing to the system. It made government spending synonymous with the idea of the welfare state, and positioned income tax payers as “givers”, and recipients of public assistance as “takers”.

The Real Issue - What's in it for me? 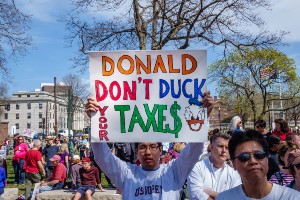 The fallacy in all this is that anyone who spends money in America is effectively a taxpayer, whereas anyone who uses roads, public schools, or enjoys the safety of having their money in a federally insured account is the beneficiary of public assistance.

In this sense, the question around taxes isn’t so much who pays and how much, but what’s being given in return. Many of us are currently locked indoors waiting for the government to mitigate the disease keeping us inside, and yet have little problem knowing $2 trillion in government spending has been allocated, as there’s the belief it will make up for the absence of private spending.

Regardless of public opinion, the idea that the growth of the US economy would outpace the current level of deficit spending was shaky before the downturn, and now is thoroughly laughable. To avoid having to draft a new mascot to explain hyperinflation, we might need to reenlist Donald Duck.