YDHTY, Episode 36: The Black Death - Applying Lessons from the 1300s to Today's Economy 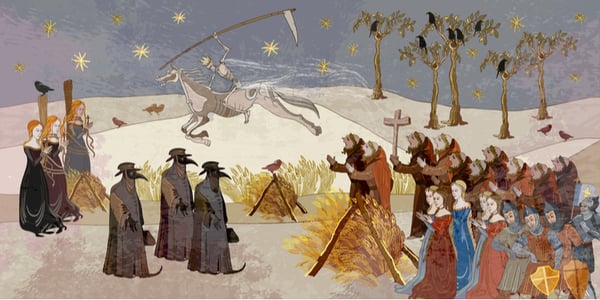 Something I’ve harped on in recent episodes of YDHTY is how the current outbreak of COVID-19 is a byproduct of decades of globalization. In the less integrated, less dynamic global economy of 30-40 years ago, what happened in Wuhan stayed in Wuhan.

This isn’t the first time this has happened, however, nor is it the largest. In the 1300s, the vast expansion of trade between Europe and the Far East also resulted in the accidental importing of rats carrying the bubonic plague, resulting in the death of anywhere from 30% of the population. I asked Louisa Woodville, Professor of Medieval and Renaissance History at George Mason University, to join me on the most recent episode of You Don’t Have to Yell to discuss the effects the Black Death had on the economy and society of Medieval Europe, and what it might say about our own reactions to the current pandemic.

You can listen to the full episode below, on Apple Podcasts, Spotify, or wherever else you get your podcasts.

The Black Death accelerated changes that were already taking place

Like now with globalization, the Commercial Revolution drastically changed the economy and reshaped the power structures of Europe. Unlike now, that reshaping worked in the favor of those at the bottom of the economic ladder.

Serfs, once bound to a life of subsistence farming, escaped to the cities where they could experience higher wages and a better quality of life.

At the same time, the power of the Catholic Church was coming into question as a spat with the King of France saw the Pope arrested and the papacy moved to Avignon.

The inability of the Church or the aristocracy to do anything about the plague further magnified their impotence, accelerating the decline in their influence to the benefit of wealthy merchants in the cities.

An incidental bright spot to one in every three people dying is that jobs become very hard to fill. While the overall economy of Europe shrunk, wages rose to meet the demand for workers.

This was especially acute in agriculture, where the aristocracy - who were well practiced in getting other people to do the farming for them - had to offer actual money to people to work the land, as opposed to having farmers working in exchange for their lord not killing them.

Like now, people looked for someone to blame. Unlike now, most didn’t know much about people from Asia or enough to trace the cause of their ills back to the region, so they fell back on the tradition of blaming the local Jewish population.

The one solace we can take in some of the historical parallels we’re seeing today is that - just like our tendency to find and blame the “other” is alive and well, so is our tendency to abandon old mores and power structures that prove irrelevant in the face of crisis.

One of the most important questions we can ask is what are those structures, and how can we replace them to become more resilient to the next crisis?