Partisan Media: We are All King George | YDHTY, Episode 52 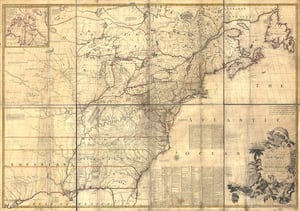 On July 2nd of this year, I celebrated America’s birthday early by driving through 10 of the original 13 colonies with my wife and four kids as we trekked from Boston to a house we rented about an hour south of Tampa, Florida. To add to the authenticity, my kids made sure to take enough bathroom breaks so we moved about as fast as the Continental Army.

Traveling to Florida right when it was emerging as the worst place in America to go might seem like an odd choice but, after weighing the risks of highway travel versus those of being stuck in a hot, poolless house in Boston for a month, I determined we were more likely to die at each others’ hands here than we were of COVID there.

I was also lucky enough to know a doctor and a nurse who treated COVID patients during the virus’s peak here earlier in the year, both of whom said it would be safe to go, provided we took the basic precautions of wearing a mask and practicing social distancing.

Aside from avoiding numerous bare faced natives and hiding from COVID in the pool, we watched the musical Hamilton enough times that it’s become the background music in my head for everything, including when I’m listening to other music (FYI - it’s really good, but it’s not that good).

What struck me during what must have been the 4th or 5th screening of it was how the principles of self rule and local governance embedded in our Constitution sprang from the ineffectiveness of being governed by a monarch who had never set foot in Colonial America issuing edicts that took anywhere from 6 weeks to 3 months to arrive based on news that took just as long to reach him.

These principles made up the bulk of the discussion in this week’s edition of You Don't Have to Yell, which you can access below, on Apple Podcasts, Spotify, or wherever your bad self gets your podcasts.

Visiting the Colonies: Then and Now

Unlike King George III, I had the ability to get instantaneous news of conditions on the ground in Florida, with the added benefit of not being distracted by having to rule a global empire while I planned out my family vacation.

I consulted national news outlets first, which broke into one of two camps:

After doing some digging, I found the most reliable sources of information were local media outlets in Tampa and this site, created by a data scientist who was allegedly fired by the State of Florida for refusing to doctor data on the spread of COVID.

What the numbers said

Below is a graph pulled from 91-DIVOC.com, a site that provides data on the spread of COVID by state and country. It shows the rolling one week average of new cases per million residents for my home state of Massachusetts, with the date we began Phase 3 of reopening highlighted (the shaded lines are southern states). 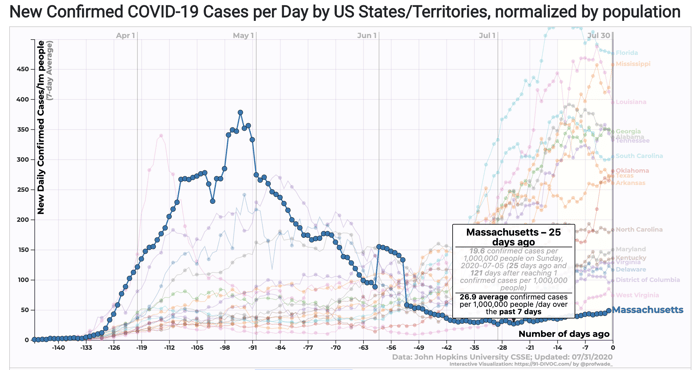 Now here's the same chart for Florida. In this case, the date I've highlighted is their Phase 2, as this is most comparable to Massachusetts' Phase 3 in terms of what types of businesses can open and capacity limits. 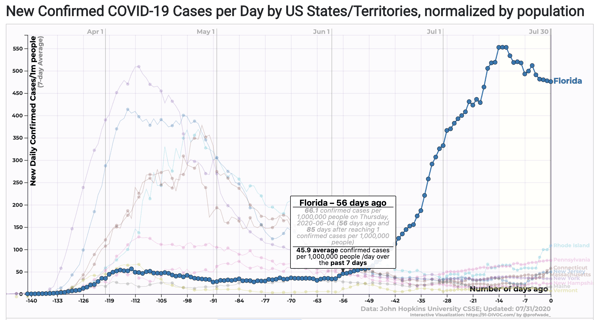 If you were watching the news on Florida from Massachusetts, as I was when they first started reopening, left leaning media outlets featured pundits talking about the gross negligence of Governor DeSantis and showed pictures of people gathering at bars and on beaches, while right leaning ones lauded the reopening of America.

Having lived through the surge of cases in March and April here, the left leaning ones reflected my experience.

Conversely, if you were sitting in Florida watching the same coverage, right leaning outlets corresponded better to the situation on the ground.

Add to this the generally derisive nature of partisan media, and you have a situation where those in the South were more likely to feel browbeaten by those in the Northeast, more inclined to believe the notion that COVID-19 wasn’t all that serious, and less likely to take precautions when the situation got worse.

We are all King George 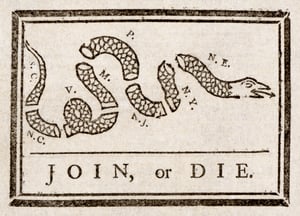 Unlike King George, the problem for Americans today isn’t that we have too little information coming too slow, but that we have too much information coming too fast. Those of us not planning a 2,800 mile road trip in the midst of a global pandemic don’t have the time or the need to get a detailed view of conditions on the ground in distant parts of the country, and generally form our opinions based on what we see on social media and cable news.

With most people gravitating towards information that corresponds with their worldview and social media and cable news being more inclined to present sensational stories with a partisan spin, we only see the worst in the places where people aren’t like us.

Like King George, Americans have largely fallen into the habit of seeking to rule places thousands of miles from us without bothering to really explore the situation in these places. Had King George bothered to improve communication with the Colonies or get a better idea as to the conditions there, he may have been able to keep better hold over his empire.

Likewise, we’d be better served approaching something that doesn’t correspond with our perspective on things with curiosity rather than venom. Don't assume every BLM protests in a city you don't live in turns into a riot. Don't assume every state that reopens is doing so because they don't believe in science.

If you see a story from another state or city that alarms you, see what the local news outlets have to say before forming an opinion. In addition to giving you the ability to hurl insults at people who don't agree with you, social media also offers the chance to ask them questions and get their perspective.

Be curious, rather than presumptuous.

While this might be hard for some, if history repeats itself, the alternative is much worse.