In any year but 2020, Christian Onuoha (pronounced Ah-no-ha) - the son of Nigerian immigrants running to be the Republican nominee for the district - would be an unusual candidate. In a year that began with us nearly getting into a war with Iran and has subsequently had so many horrors and tragedies pile up that we forgot about the whole "missiles being fired at US troops" thing, I found Christian to be an unusually pleasant surprise.

While the Republican Party hasn't historically been the party of immigrants or people of color over the last few decades, it took a distinct right(er) turn after the election of Donald Trump, whose language around immigration and race alienated many minorities, foreign born Americans, kids and grandkids of foreign born Americans, and a bunch of other people unrelated to the subject. This being said, Onuoha's message looks beyond the next 1-5 years of the Republican Party, and focuses on preserving the environment that allowed his parents to succeed in a new country for the next generation.

You can listen to the full episode below, on Apple Podcasts, Spotify, or wherever your bad self gets your podcasts.

From Civil WAr to Newark 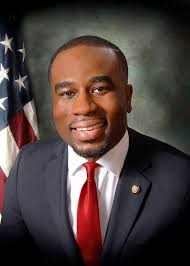 Onuoha's parents came from the losing side of Nigeria's three year civil war, a conflict where millions died through famine and violence. Originally coming to the US for an education, they followed what we'd consider the typical American dream - renting an apartment in Cory Booker's hometown of Newark, starting a family, and eventually buying a home in the nearby suburb of Union.

As the grandson of immigrants, your author can speak to how people who come to this country never let you forget how easy life is in this here, and usually follow this up with a comment about how entitled and/or lazy you are.

Onuoha, a 27 year old soon to be father of two who holds down a full time job while running for office and preaching at his church in his spare time, appears to have gotten this message. In his words, "I couldn't imagine a life where I was succeeding just for myself."

While the focus on community and self-reliance might seem to have made Onuoha a natural fit for the Republican Party, he never entertained it as an option, hearing stories over the years about the party being largely anti-black. It was only after getting involved in local government and being approached by someone from the party that he found it to be a fitting political home for his Christian (as in the religion) values and views on the benefits of giving people the liberty and responsibility to guide their own lives.

Major Problem with the Major Parties

Christian's willingness to work within the structure of a major party reflects his appreciation for America's stable (yes - I just called it that) political system. While, on the surface, our political dialogue may seem more vitriolic and divisive than any of us remember, it also lacks the problems of less stable democracies where you're more concerned about your polling place exploding than waiting in line to vote.

During our conversation, he expressed regret at the fact many African American men and other people his age have become so disenchanted with America's political system that they don't vote. He also found it hard to ally himself to a Democratic Party that, while seemingly more open to people of color and immigrants than the Republicans, was also largely responsible for many of the problems in his state and his community.

In his words, the anti-black image of the Republican Party is a device used by the other side to convince African-Americans they have no choice but to vote Democrat and secure their votes or, at the very least least, keep them from voting against them.

To me, Christian's choice seems to be to enter into a party structure that would, at best, preserve the status quo, or join a party whose current leader seems to feel his parents never should have been allowed in.

The Mess We're In

Ronald Reagan was quoted as saying the word “status quo” is Latin for “the mess we’re in”. In this sense, Onuoha could be classified as a true Reagan Republican.

What I heard in my conversation with Onuoha was someone who saw how the current state of affairs in New Jersey was limiting the potential for people of his generation to repeat what his parents had done, and someone with a strong desire to serve.

At the same time, the chips remain stacked against him and against the change he's looking for. While 30% of New Jersey's voters are registered Republican, the districts are carved in such a way that leave the party relatively voiceless. Like in my home state of Massachusetts, anyone looking to have any sort of impact politically needs to work within the Democratic Party, meaning certain sacred cows remain untouched.

The outcome is consistently low voter participation, and a government that serves those who serve the party.

In this sense, the electoral system in New Jersey and other one-party states bears a closer resemblance to countries like Nigeria than the system the Founding Fathers had in mind - one where patronage takes a leading role and policy comes second. If the structures that allow elected officials to immunize themselves from the will of the voters isn't changed, the electoral system may not be the only similarity.