The End of Slavery in Brazil: For the English to See

“Para inglês ver” (“for the English to see”) is a phrase commonly used in Brazil to describe a tradition of policies designed to make the country seem attractive to foreigners, while not addressing the problem these policies set out to solve on paper. It traces its roots back to a treaty signed between Brazil and Great Britain in 1826 which declared an end to the slave trade, after which Brazil maintained the institution of slavery for another 60 years. 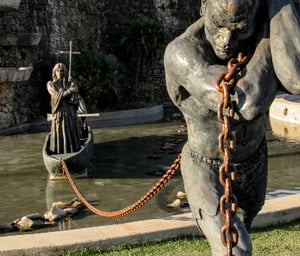 To discuss the racial history of Brazil and its parallels with that of the United States, I invited G. Reginald Daniel, Professor of Sociology at the University of California Santa Barbara and author of “Race and Multiraciality in Brazil and the United States: Converging Paths?” on this week’s episode of You Don’t Have to Yell (recording below).

Like the United States, slavery was part of the founding of Brazil - both starting as largely agricultural colonies dependent on free labor. Unlike the United States, where most colonists were family units, Brazil’s mix of single white men with people of native and African ancestry led to a demographic mix where, at the time of emancipation, the largest percentage of the population was neither black, nor white, but multiracial (source).

As a result, Brazil lacks the history of legal segregation seen in the United States, where laws were established with the specific purpose of separating black and white. At the same time, Brazil also lacks a history of institutions such as the Freedmen’s Bureau, designed to acclimate the newly emancipated to lives as free citizens, leaving former slaves to their own devices. This predictably resulted in Brazilians of African descent returning to a life of slavery in all but name.

At the same time, Brazil’s policy of whitening their population in the period following emancipation says as much about the racial attitudes of the time as Jim Crow does for the United States. After the abolition of slavery, Brazil implemented policies designed specifically to attract white immigrants from Europe, while restricting immigration of any black person - including those from North America, resulting in a demographic shift where the white population grew from 34% in 1870 to 64% in 1940 (source).

Like Jim Crow, the message of Brazil’s whitening strategy was the same: both countries viewed blackness as a problem.

From my conversation with Professor Daniel, it seems the origin of a racial hierarchy granting lighter skinned people higher status traces back to the arrival of the first Europeans to the New World. As much as empathy is a defining human trait, so is the ability to dehumanize another for the sake of personal gain, and this mechanism seems to have been employed throughout the colonial period.

The results in both countries are largely the same. Both Brazil and the United States have similar racial disparities in income, education, and rate of incarceration (source). Brazil’s efforts to rectify these issues are complicated, ironically, by the fact that veritably everyone in the country has some African ancestry, making it difficult to objectively define who is racially disadvantaged and who isn’t.

In the case of either the United States or Brazil, part of the solution is speaking openly about our philosophical history of white supremacy, and understanding how it permeates our perceptions of race in thought and popular culture. While policies to rectify the legacy issues of slavery are necessary, without an accompanying cultural shift, our equality is simply for the English to see.