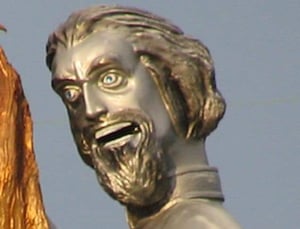 In February, I kicked off Black History Month speaking with Nikki Brown of the University of Kentucky for episode 27 of YDHTY (full recording below). We began the conversation discussing Forrest Gump - title character of the novel and then film by the same name.

In the novel, Gump’s mother explains how he descended from Nathan Bedford Forrest, a former Confederate General, and that his name is a reminder that, “sometimes we do things that, well, don’t make no sense.”

In the case of the real life Nathan Bedford Forrest, these things included the massacre of Black Union soldiers attempting to surrender at Fort Pillow, and going on after the war to become the first Grand Wizard of the Ku Klux Klan.

As penance for his misdeeds, Forrest had a park named after him featuring a statue that bore his name (since removed), currently has a bust in the Tennessee State Capitol, and is almost farcically portrayed in a statue facing I-65 in Memphis (pictured right).

(It should be noted that said ugly statue is on private property and was designed by Jack Kershaw, a publicly professed white nationalist who served as attorney for James Earl Ray, convicted killer of Martin Luther King, Jr.)

While monuments celebrating historical figures like Forrest are fairly easy to deride, the character of Forrest Gump presents a more troubling side to this history - one where America’s troubled record on race is effectively answered with “nobody’s perfect”, and the unspoken assumption is that we should just move on.

The Problem with All Men Being Created Equal…

If we trace the problem back to its origins, it began when Thomas Jefferson, a prominent slave owner in his own right, wrote the phrase, “All men are created equal” in the Declaration of Independence.

Whether he would have corrected this had he known the outcome is up for debate, but it prompted us to ask how the institution of slavery can exist in such a society which, prior to this point, had never been questioned (for more background, check out YDHTY episode 20).

It also laid the groundwork for white supremacy, the counter to the argument against slavery being that African Americans weren’t capable of responsibly handling the liberties afforded to white men. The Civil War was first fought and then laws enacted with the goal of protecting the white population from the unfettered impulses of newly freed African-Americans.

While the legal structure for white supremacy was gradually eroded, the cultural conditioning used to justify it was not. The Ku Klux Klan, the Tulsa Race Massacre, and the more subtle forms of segregation practiced in the North were all responses to the idea that the only way to ensure white safety is to keep the black population in check.

Democracy being a government guided by what people think, this philosophy has played out in recent decades in America’s approach to criminal justice, policing, funding education and social programs, and the choice of some Americans to respond to the recent killing of George Floyd with crime statistics.

It’s true that if we required every celebrated historical figure to pass a modern day litmus test for “wokeness”, everyone would fail. George Washington and Thomas Jefferson aren’t celebrated for the entirety of their being, but for what they did to advance the cause of liberty for all people - even the ones they felt shouldn’t be free.

America is a land of perfect principles founded and run by people who continuously fail to live up to the mission. It’s not in their failures, but in what they did to question long held norms in the name of those principles that prompt us all to be better people.

In contrast, the 1,500 some-odd monuments to those who fought for the Confederacy celebrate men who fought to maintain a social and political order with whites at the center, reinforcing centuries old beliefs about race, and making it easier for those in power to stoke fear when this order is threatened.

Per my earlier post, White America can choose to examine how this belief system has crept into their thoughts and communities, or follow in the tradition of doing things that don’t make no sense.